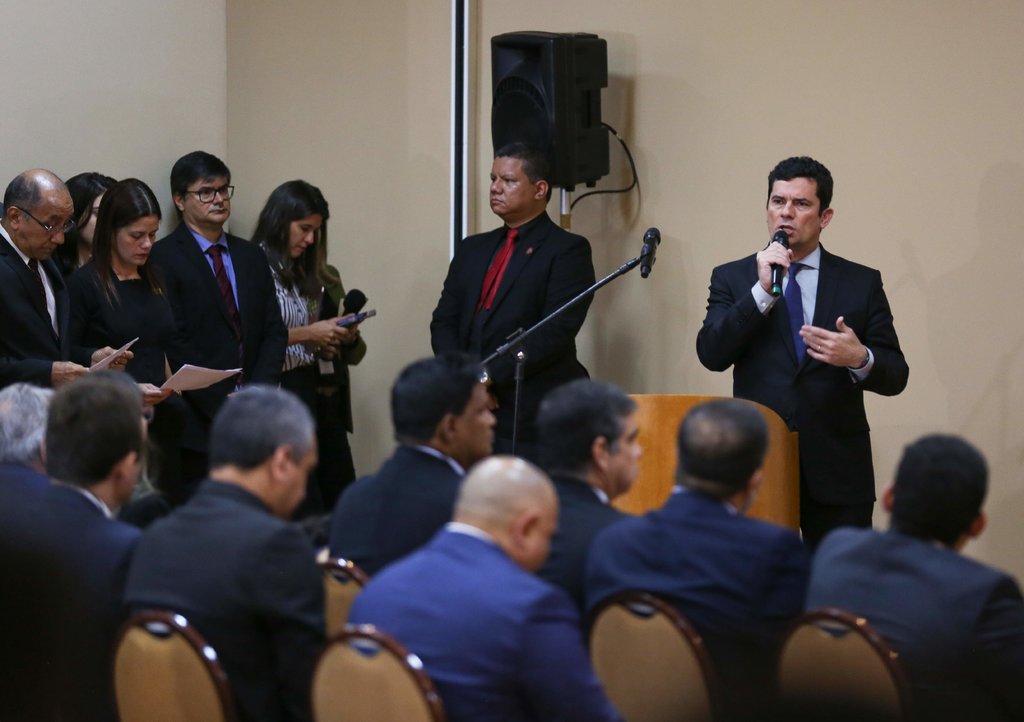 Leaked private messages among law enforcement officials in Brazil have called into question the integrity of a vast corruption investigation that roiled the country’s political establishment and rippled across much of Latin America.

Excerpts from cellphone chats published Sunday night by the online news site The Intercept suggest that Sérgio Moro, the most prominent judge involved in hearing cases in the scandal known as Lava Jato, or Car Wash, consulted with and advised federal prosecutors on strategy as they took on towering political figures in recent years.

The revelations provide powerful ammunition to critics of Mr. Moro, who convicted former President Luiz Inácio Lula da Silva of corruption and money laundering in 2017, which made him ineligible to run for a new term in last year’s presidential election.

Mr. da Silva’s imprisonment paved the way for the election of Jair Bolsonaro, a far-right politician who appointed Mr. Moro as justice minister and offered to appoint him to the next vacancy on the Supreme Court.

Some of the discussions may have been illegal, according to legal experts, who predicted that the disclosures could help defense lawyers in current cases and offer fresh grounds to appeal convictions.

“This situation is terrible for the judiciary and terrible for his reputation,” Mr. Mello said in an interview.

One set of leaked messages suggest that the federal prosecutor Deltan Dallagnol, who oversaw Mr. da Silva’s prosecution, had qualms about the strength of the evidence against the leftist former president. Mr. da Silva was convicted of corruption and money laundering for accepting about $1.1 million in work from a construction company in exchange for giving the company contracts with the state oil company.

Other chats indicate that prosecutors discussed strategies to stop Mr. da Silva from giving an interview from jail before last year’s October election, apparently fearing it could help Mr. da Silva’s Workers’ Party in the election.

Mr. Moro said that the messages do not show that he acted improperly and criticized The Intercept’s coverage as “sensationalist.” He and federal prosecutors defended the integrity of their work and faulted The Intercept for publishing the articles without seeking comment from them beforehand.

In a statement issued Sunday night, the Lava Jato task force said that the chats had been hacked, and that several of its members were “victims of a criminal action by a hacker who committed the gravest of crimes.”

The statement expressed concern that the leaked messages may have compromised existing cases, and said that the prosecutors remained “committed to doing work that is technical, impartial and apolitical.”

The revelations come as Mr. Moro is struggling to persuade Congress to approve a set of far-reaching reforms that would give investigators far more authority in corruption inquiries. The initiatives face strong resistance in Congress, where several lawmakers are under investigation for corruption.

Car Wash, which began in 2014 with a routine investigation into money laundering, has led to more than 400 prosecutions in Brazil and the recovery of billions of dollars from companies and defendants implicated in vast kickback schemes.

The scandal reverberated beyond Brazil, leading to the prosecution of presidents, the suicides of at least two suspects and the apparent assassination of a witness in Colombia.

During its early years, the Car Wash scandal appeared to mark a transformational moment for Brazil and much of the region, turning Mr. Moro and other leading figures involved in the case into folk heroes. But their legacy has come under increasing scrutiny as more Brazilians have come to question whether the anti-corruption crusaders were motivated by partisan politics.

The Intercept, which has a Portuguese-language offshoot that focuses on Brazilian news, said it had received a “massive archive” of private chats, audio messages, videos, photos and filings from an anonymous source.

It remained unclear on Monday how the messages, which were exchanged using Telegram, an encrypted cellphone messaging service, were obtained.

The Intercept said that it published the chats after concluding they were “in the public interest” because they “exposed transgressions.” The organization did not seek comment from the officials mentioned in the articles before publishing them because editors feared the government might try to prevent them from being published.

Some of the messages appear to show that Mr. Moro made pointed suggestions to prosecutors. For instance, he once suggested that they reverse the order of two planned operations. At one point he seemed to criticize the slow pace of the investigation, telling Mr. Dallagnol, the prosecutor, that it had been too long since the task force had announced a new set of charges.

Mr. Moro also appears to have shared an investigative lead relevant to the case against Mr. da Silva in 2015, possibly violating a penal code provision that bars judges from giving advice to one of the parties in a case.

Leftist politicians said The Intercept’s revelations support their longtime contention that Mr. Moro and the Lava Jato team were guided by partisan politics.

After the investigation exposed a vast system of kickbacks, Brazilians took to the streets to voice their outrage. Their mobilization helped set the stage for the impeachment of President Dilma Rousseff in 2016.

Ms. Rousseff, a leftist politician who succeeded Mr. da Silva, called the revelations proof that Mr. da Silva had been prosecuted and convicted to thwart his bid to return to the presidency.

Mr. da Silva’s legal team said Monday that it intended to use the chats to try to get his conviction overturned.

Other lawyers who have represented Car Wash defendants said the revelations made them feel vindicated.

“The facts are very serious and they prove the bias of the judge,” said Juliano Breda, a defense lawyer who represents people implicated in the scandal. “Moro’s conduct in Lava Jato was clearly political.”

The revelations come days after Pope Francis, who has called corruption a serious scourge, lamented the manner in which such cases have been handled by judicial authorities in some countries.

The pope, who is Argentine, told a gathering of judges from the Americas during a meeting last week that judicial crackdowns had weakened democracy, “mined emerging political projects and enabled the systemic violation of social rights.”

In his address, which didn’t single out specific countries, the pope used the term “lawfare,” which leftist politicians have used to describe prosecutions they see as a form of political persecution.

The Pope Francis’ Letter to Lula