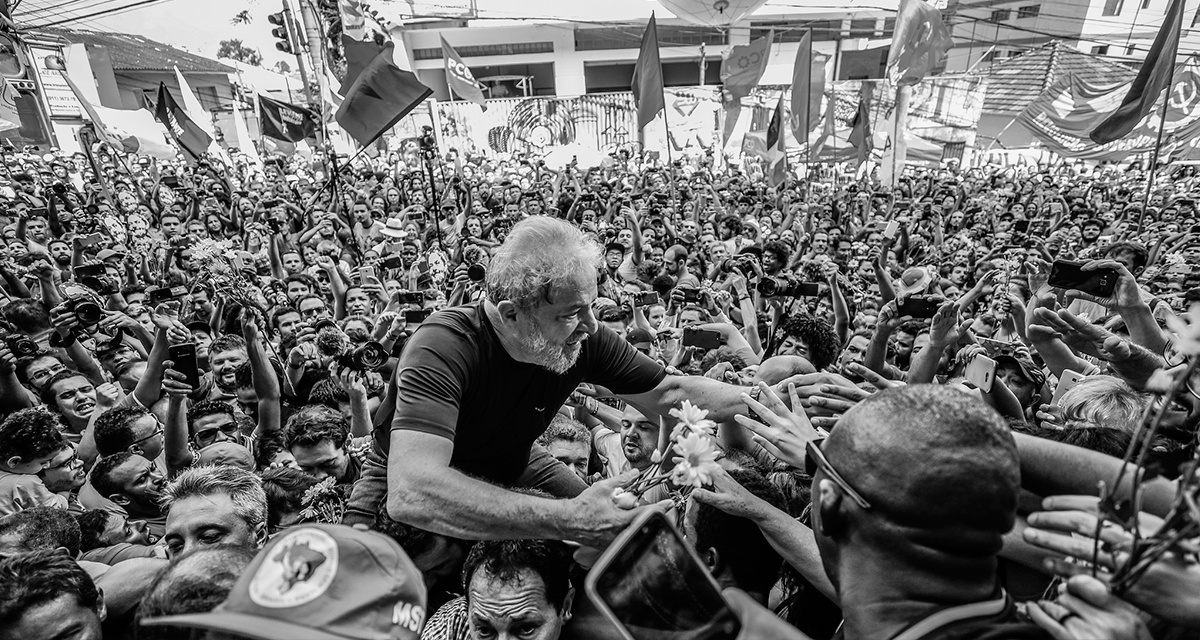 First of all, I would like to thank you for your solidarity and for the affection I have been receiving from the Brazilian people as well as from leaderships of other countries during this nearly 1-year period I have been unfairly imprisoned. I’d like to express my special thanks to the comrades of the vigil in Curitiba, who give me comfort every day; to the comrades who are part of the Free Lula committees in Brazil and abroad; to lawyers; jurists; intellectuals; and democrat citizens who have expressed themselves in favor of my release.

The strength that makes me resist this crucible comes from you and from knowing that I am innocent; however, I resist mainly because I know I still have an important mission to accomplish at this moment in which democracy, national sovereignty, and the rights of the Brazilian people are threatened by powerful economic and political interests, including the interests of powerful countries.

As I have always done in my life and my over 45 years of trade union and political activity, I see said mission as a collective challenge. My fight to have a fair trial in which my innocence is acknowledged in view of the irrefutable pieces of evidence produced by the defense only makes sense if understood as part of the defense of democracy, of resumption of the state ruled by law, and of the project of development with social inclusion that country wants to rebuild.

As each day passes, it becomes more evident to the population and to the international public opinion that I was convicted and arrested only because, as a free man and a candidate, the majority of the population would choose me as their president. My candidacy was the people’s response to submissiveness to foreign interests, to the abandonment of social programs, to unemployment, to the return of hunger, to all the evil installed in the country through the coup disguised as impeachment. It is a fight we must be in together, in the name of everyone.

To prevent me from running in the elections, a judicial farce was set up with coverage from the mainstream media, especially Rede Globo. They poisoned the population with hours and hours of false news in which Lava Jato accused me whereas my defense was belittled, if not censored. The Constitution and the laws were disrespected, as if there were a criminal code of exception, exclusively to be applied to Lula, in which my rights were systematically denied to me.

As if were not enough to arrest me for crimes I have not committed, I was forbidden to participate in debates and interviews that are part of the electoral process; my candidacy was rejected in clear disregard for the law and the UN; I was forbidden to give interviews, I was even forbidden to attend my older brother’s funeral. They want me to disappear, but it is not me they are afraid of: they are afraid of the people who identify themselves with our project and who saw in my candidacy hope to recover the path to a better life.

Days ago, when I said goodbye to my dear grandson Arthur, I felt the weight of the injustice that struck my family. Little Arthur was discriminated against at school for being my grandson and suffered a lot because of that. So, I promised him I will not rest until my innocence is acknowledged in a fair trial.

In the emotion of that moment, I remember saying: “I will show to you that the true thieves are those who convicted me.” Shortly after, journalist Luís Nassif revealed to the public the secret illegal agreement between the Lava Jato prosecutors, the 13th Federal Court of Curitiba, the United States government, and Petrobras – said agreement involved the amount of 2,5 billion of reais.

Said amount was taken from Brazilian people’s largest company by a New York court based on plea bargain deals presented by Brazilian prosecutors.  And they went to the United States, with the help of the then State Attorney General, to weaken even more a company in which international powers have always been interested.

In exchange for said fortune, Lava Jato promised to disclose the secrets and strategic information of our Petrobras.

It is not about certainties, but about concrete evidence: signed documents, official acts performed by authorities. These moralists without moral are currently high-rank officials in a government that was only elected because they prevented me from running in the elections. But the one in prison is Lula, who’s never been the owner of an apartment or of countryside property, who’s never signed Petrobras’s contracts, who’s never had secret bank accounts such as the one that has been discovered just now.

In addition to expressing my outrage in view of these facts, I’d like to say to you that time is revealing the truth; tell you that we cannot lose hope that the truth is on our side and will prevail. So, I ask each one of you to strengthen even more our fight for democracy and for justice. And we will only attain these goals by defending the rights of the people and national sovereignty because they promoted the coup and interfered in the elections precisely to act against these values. Their aim is to give away our assets and undo social accomplishments. It is important that Free Lula committees have this very clear and conduct more and more actions in society, on social networks, in schools, and on the streets.

I have faith in God and I trust in our organization, and I am certain when I say: we will meet again. And Brazil will be able to dream again of a better future for all of us.

Thank you very much, and let’s fight, dear comrades.

A warm hug from

Why Lula should be nominated for the Nobel Peace Prize

Lula’s letter to the Brazilian People