Why do we demand freedom for Lula? 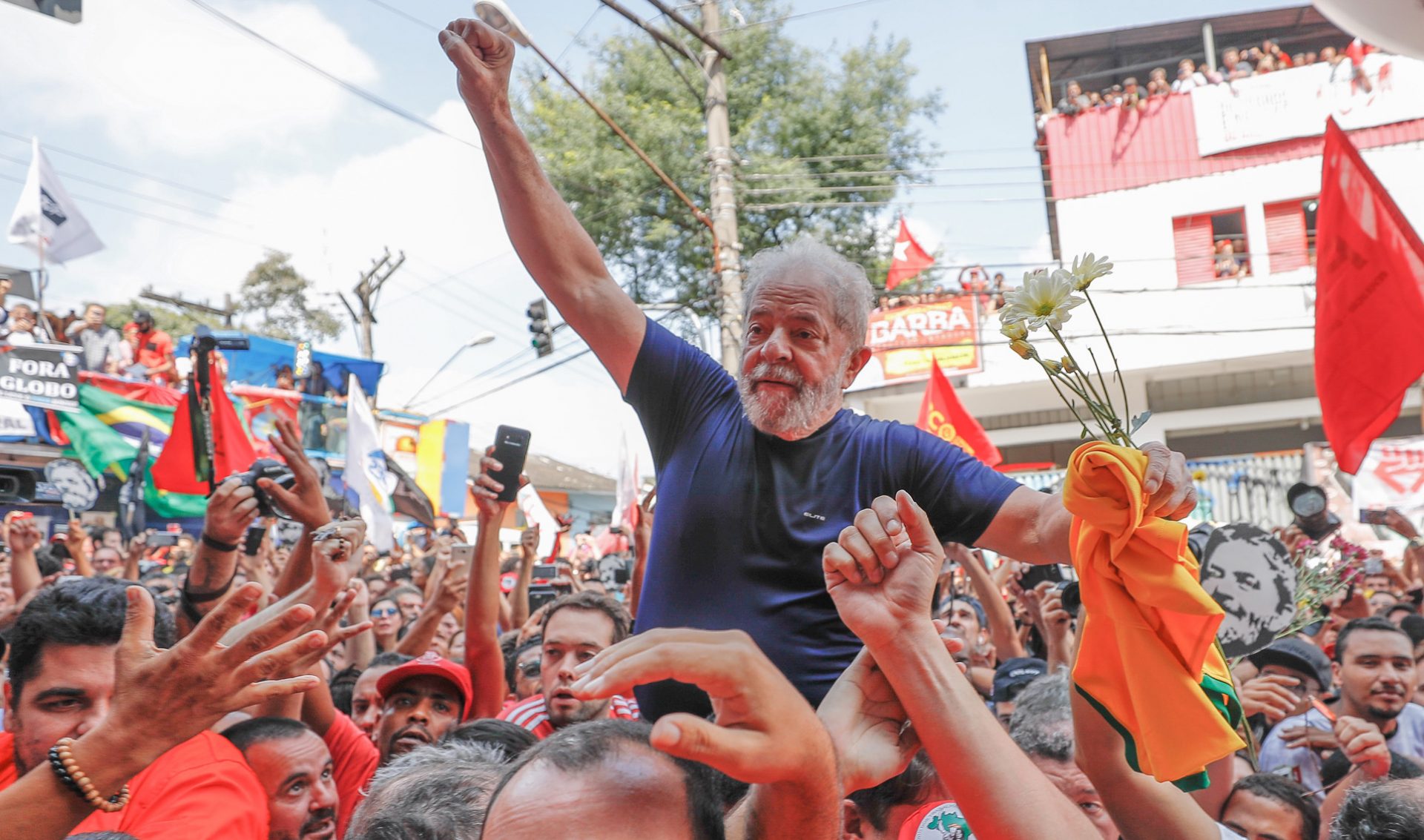 Luiz Inácio Lula da Silva
Metalworker and former unionist, the workers’ political leader was president of Brazil between 2003 and 2010. His administration promoted a social revolution by lifting 40 million Brazilians out of extreme poverty, taking Brazil out of the UN Food and Agriculture Organisation’s World Hunger Map, and creating the possibility for millions to enter university.

Lula is a political prisoner
His imprisonment happened to prevent him from winning the 2018 presidential election and bringing back to Brazil a democratic and progressive plan. Lula, who was leading in the polls, was barred from running, was imprisoned, and was not even allowed to give interviews, so he could not communicate with the Brazilian society. Judge Sérgio Moro, responsible for Lula’s conviction and arrest, became a justice minister for Bolsonaro. In other words, the one who conducted a trial without proof against Lula was associated with the person who most benefited from Lula’s imprisonment: Jair Bolsonaro, who has been implementing an far-right agenda, weakening labor rights and social justice protections.

1st Unjust Conviction
Lula was wrongfully convicted for the crime of passive corruption, a crime pinned on the supposed ownership of an apartment, without any material evidence. In fact, at the time the conviction took place, this apartment belonged to OAS, a construction company that used it as a collateral for a loan with the bank Caixa Econômica Federal. The sentence claims that Lula was found guilty of an unspecified ex-oce act, a non-existent act in Brazilian criminal law. During the trial, none of the 73 witnesses heard at the 23 hearings could show proof that Lula owned the property. However, judge Sérgio Moro used as principal evidence an uncorroborated statement, obtained through a plea agreement from the CEO of the construction company OAS, who had previously been sentenced to a 40-year prison term, and who received a drastic reduction in his sentence as a reward.

2nd Unjust Conviction
Accused of having favoured Brazilian construction companies in exchange for renovations to a farmhouse, up to now there is no specification, by the accusers, of which of Lula’s actions could be classified as an act of corruption. Nor was there any proof that he owned the property and, therefore, was the beneficiary of such renovations. On the contrary, the purchase of the “Atibaia farmhouse” as well as its current ownership, were confirmed to Mr. Jacó Bittar’s family. Even the Federal Attorney’s Oce recognizes not they are not able to confirm any money laundering related to the Atibaia farmhouse purchase. Even so, Lula was sentenced to 12 years and 11 months imprisonment in a piece full of gross mistakes.

Democracy at Risk
The political imprisonment of Luiz Inácio Lula da Silva and the constant violations of his civil and political rights carried out by a partisan judiciary at war with its own people; The execution of Marielle Franco and Anderson Gomes, and the disturbing delay in solving the case involving the council woman – and human rights activist – expose a true deterioration of the Democratic Rule of Law in Brazil.

Free Lula!
Support from worldwide democratic forces is paramount to push forward the International #FreeLula Movement, denouncing the coup d’état taking place in Brazil and its consequences, such as the attacks on democracy, the arbitrary and capricious judiciary, the freezing of public expenditure, the new wave of privatizations and the handing over of our natural resources to private companies and foreign groups, and the extensive offensive to take away workers’ rights.

Who we are
The International Solidarity Committee in Defense of Lula and Democracy in Brazil gathers diverse international groups, popular movements, trade unions, political parties, democracy and human rights activists, and, also, the Free Lula Committees all over the world.

Read more about The International Solidarity Committee in defence of Lula and the Democracy in Brazil here.

How to Take Part?
Sign the digital manifesto: Lula is a political prisoner. Lula Livre! http://bit.ly/lulalibre

Organize a Lula Livre Committee: that can gather a group of people or organizations to create actions for #FreeLula.

May 1st, Day of Struggle for #FreeLula