Downfall of Operation Car Wash exposes Moro as leader of the task-force, and scandal falls on the Supreme Court 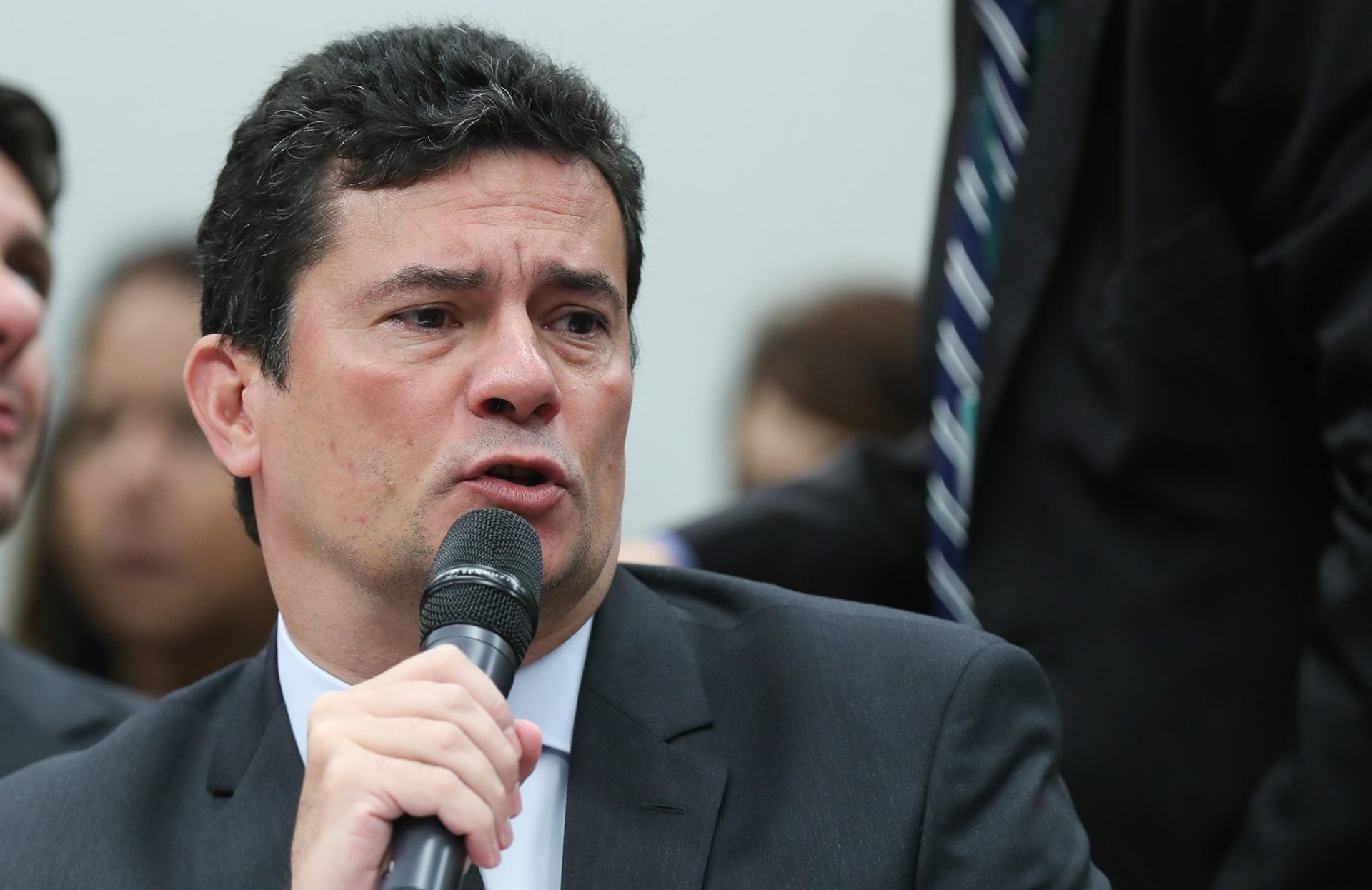 Seven years after an unprecedented breakthrough in Brazilian politics and economy, the then powerful Operation Car Wash is now a dim shape with the news that it no longer exists – at least not in the way it became known. The task-force in Curitiba ceases to be and becomes a sidekick of the Organized Crime Special Combat Group (Gaeco). The fall of curtains take place in the wake of a spiral of discredit in the juridic world, which culminated with the exposition of dialogues between ex-judge Sérgio Moro and the then head of the task-force, Deltan Dallagnol.

The content, made public on Monday 1st of February by the Surpreme Court minister Ricardo Lewandowski, at the request of Lula da Silva´s defense, confirms part of the information that had been revealed by The Intercept Brasil, in the series Vaza Jato (Leak Express).

Published since 9th of July 2019, the series or reports brought some dialogues between Dallagnol and Moro, but especially conversations between prosecutors of the task-force of the Public Prosecutor´s Office of Paraná. A total of 105 news stories were written by several press medias, including El País Brasil, sourced from the material obtained by The Intercept.

However, the exposed material this Monday goes way beyond what was exposed by Vaza Jato. And it has the potential of rewriting the history of the operation. In 50 pages of selected messages by the expert Cláudio Wagner at the request of Lula´s defense team, it is crystal clear the way Moro, who should be neutral to judge lawsuits offered by the Public Prosecutor´s Office of Curitiba, had a permanent communication with the task force team, especially with the then head of the operation Deltan Dallagnol.

Between September 2015 and June 2017, there are records of systematic dialogue between both through the app Telegram – sidestepping the legal process – to deal with decisions in progress, in which the sitting judge demands information and suggests at least one source to be heard by the Public Prosecutor´s Office in the lawsuit against ex-president Lula. “The material Moro gave us is hot. If true, it´ll be the end of the line for 9 and Marcio deserves a medal”, says Dallagnol in a communication made just after 7h pm on 29th July 2016.

Those messages were presented in the way they were written in the original language in the seized files; the “number 9” is how the prosecutors treated Lula mockingly, making fun of his handicap – a finger was lost in one of the hands lost due to a work accident.

It wasn´t the first time Moro suggested ways for the investigation. In an excerpt dated 7th December 2015, he tips off the prosecutor: “So, listen. A source informed that contact person is uncomfortable for having been asked the entry in the minutes of deeds for the transfer of property from one of the children of the ex-president. The person is apparently willing to give the information, so I’m passing on. The source is serious.” Deltan then thanks the courtesy – “Thank you” We´ll get in touch”. For Moro it was worth following the clue, after all, it would be “tents of real estate”. The source in point did not reveal itself credible as the continuation of the dialogue would point out. The conversation had been revealed in June 2019 by The Intercept. On that occasion, Moro affirmed to the newspaper O Estado de S. Paulo, which broadcast the communication, that “everything that came which was relevant, we either forwarded to the police of the Public Prosecutor´s Office, no matter if the information benefited defense or prosecution”. According to him, the objective was to “discover the truth”.

The methods made public now, however, are considered bad for going against any expected principle of impartiality, let alone in a case of extreme delicacy with the potential to change the political direction of a country – Car Wash was responsible for framing the ex-president under the Clean File law and remove him from the presidential race against Bolsonaro in 2018.

In another excerpt from 14th December 2016, Delton gives Moro a follow up on two other cases. “Denunciation against Lula to be filed briefly. Denunciation against Cabral to be filed tomorrow”, informs the prosecutor, citing Rio de Janeiro´s ex-governor, Sérgio Cabral. The judge then replies the off record communication almost as a cheer leader: “A good day after all”, followed by a smiling emoticon.

Conversations off records were intercepted by Operation Spoofing, a Federal Police investigation which arrested hackers who invaded cellphones from prosecutors of Car Wash and had access to messages from their Telegram app – which were grounds for Vaza Jato. The dialogues were then obtained in full by the PF (short for Federal Police).

Lula´s defense requested the excerpts concerning the ex-president´s lawsuit. In them, the two protagonists of Car Wash show the intimacy of co-workers. They share emojis, laughs in internet language,requesting private meetings with members of the taskforce and even leading the way on how to communicate with the press. “We need to talk urgently. Today at 2h30 pm or 3h00 pm, can you make it? You´d better come in small groups though, we´d better keep it low key. Who knows you, Lima, Athayde and Orlando?”, Moro proposes to Dallagnol, possibly mentioning Carlos Fernando Lima, Athayde Ribeiro Costa and Orlando Martello Jr.

If Vaza Jato brought about an earthquake and represented a loss of prestige for the operation and Moro, messages known this Monday could bury the credibility of some decisions made by Car Wash, according to jurists heard by this newspaper. The scandal is at the door of the Supreme Court, which has an encounter with Moro on the ruling of Lula´s defense team´s request of suspicion of the ex-judge – and subsequent annulment of the conviction of Lula on the Guarujá triplex apartment.

Lula was arrested in april 2018 for supposedly having received an apartment in his name as a kickback to favors for the construction company OAS. He was released after 580 days, in november of the next year, after the Supreme Court gave another interpretation about imprisonment of defendants in court of second instance.

The easy flowing communication between Moro and Dallagnol violates the relationship judge – prosecutor and breaches the principle of impartiality in the eyes of the Law. “This is the biggest scandal of the history of the judiciary in Brazil”, says the jurist Rafael Valim. Marco Aurélio de Carvalho, leader of the group Prerogatives – which gather around 1000 jurists, including lawyers of defendants from Car Wash who are activists against the worn out practices of the operation – follow the same line.

“The Supreme Court has a unique chance of giving new credit to the Justice system. In this process, much credibility was lost with the politicization of the Judiciary”, says Carvalho.

Car wash participated of investigations leading to 278 convictions, some of them pleaded guilty defendants, such as the businessman Marcelo Odebrecht, who held a bribery department for politicians in the company, or Pedro Corrêa, ex-member of parliament for the PP, who mentioned exchanging support with PT´s governments for cabinet positions, besides positions as board members of state companies such as Petrobras. “The same that was made in previous governments. Including with agreements and favors to businessmen, just like all other governments of which I participated since 1976”, he stressed, during an interview to Paraná Portal. In his plea agreement with prosecutors, Correia denounced corruption in Petrobras since the Government of Fernando Henrique Cardoso (1994 – 1998 and 1999 – 2002).

The problem is the trials where trumped up investigations led to direct consequences to the future of politics in Brazil. Car Wash had already revealed conversations which demonstrated the same strategies of feeding the press and the direct contact prosecutors with street rallies which demanded the ousting of Dilma Rousseff in 2016, feeding back popular pressure to favor Car Wash demands.

Even when going through illegalities, such as the exposition of a phone call between ex-president Lula and Ms. Rousseff, in which they discussed the future appointment of the ex-president as Chief of Staff. The speed of Lula´s conviction has also caused a clear sensation of partiality, including with the confirmation of the verdict in the second instance.

Breaking point
The trial fo the suspicion of Moro may then be a breaking point of Car Wash and will determine the future of combat against corruption in Brazil. The excerpts of files seized by Operation Spoofing show that the success of the operation came at a high expense to the image of Brazilian justice, with excesses affecting the credibility of the judiciary system. Ignoring such deviations would trigger ripple effects and tarnish the Supreme Court itself.
The file is being held by Justice Gilmar Mendes, who requested review and let everyone know that it could be tried by the Second Panel of the STF as early as the first semester of this year. In theory, all the information published would make it harder to Justices of the court to justify behavior contrary to the principle of impartiality of Brazilian Law.

The question, however, is whether they will admit thos messages as legitimate or make them illicit evidence, says the lawyer Alberto Toron, who advocates for defendants of Car Wash. “Knowingly this material was intercepted in an illicit manner (*by hackers who invaded the cellphones of members of Car Wash and Moro), which brings a great discussion to the penal process, since they are not valid to accuse someone. But how about for self-defense and show partiality of a judge?”, questions Toron.

The pile of messages confirms what defense lawyers for the defendants complained about from the beginning of the operation, in 2014. “A judge needs to be equal and grant to the accusation and the defense the same conditions. This is the radical denial of this fundamental principle in the exercise of the bench”, points out the lawyer Maurício Dieter, professor of criminology of the University of São Paulo. Prosecutors and the judge incarnate a sort of a “court judge colonel”, as writes the jurist and political scientista Christian Edward Cyril Lynch – recalling tenants who rebelled against the Old Republic in the 1930´s – the new heroes, here judges and prosecutors of Car Wash, took on to themselves the role to clean up the politics, “if not under machine gun fire, at least through leakings, plea bargains and tough judiciary convictions”. They were quite successful for a while in their “Justicialist Revolution”.

Moro has never recognized the merit of the conversation and has always affirmed that they could have been adulterated. After movements by Justice Lewandowski, the ex-minister of Justice under the government Jair Bolsonaro, charged back with his reasonings: “I do not recognize the authenticity of the referred messages, since as I had previously affirmed I do not keep messages from years past”, said him in a statement.

“The referred messages, if true, would have been obtained by criminal means, by hackers, from cellphones of prosecutors of the Republic, and as such of lamentable use for any purpose, ignoring the illicit origin”.

The problem of this argument is that the Federal Police itself, when taking orders from Moro when Car Wash published their stories, conducted an expert investigation and determined that the messages are legitimate. The MPF (the Public Prosecutor’s Office) in Curitiba informed, through their media relations, that they do not comment the case.